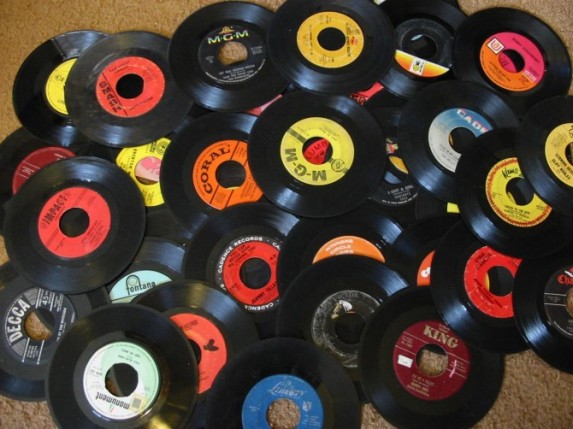 In 1948, CBS introduced the long-playing record album—the LP.  The new records spun at 33 1/3 revolutions per minute rather than the 78 RPM that had been the standard for forty years.  This slower speed, combined with the fact that the smaller needle allowed the grooves to be closer together than the old 78’s, made it possible to put more music than ever before on each side.

Also in 1948, and at about the same time that CBS was introducing the LP, RCA was across town bringing out the first 45 RPM ‘Single’.  The 45 had a better sound than the old 78’s as well, though not as good as the LP, and not in stereo.  But the 45 had a decidedly distinct feature in that while the LP had 20 minutes of music on one side, the 45 featured one song—and it also was perfect for the jukebox.  (Author’s note:  As the proud owner of a 1956 Seeburg jukebox that still plays terrific–albeit some ‘scratchy’ classics–I’m quite appreciative of this ‘technological advancement’!)

Eventually, 45’s gained the youth vote while the LP’s enjoyed wider appeal to the high end of the listening market.  While each new record required a new type of player, and in time players were developed to play both formats, neither CBS nor RCA intended to co-exist alongside the other.

Interestingly, as the two best ideas of the next era of music had effectively been designed and introduced to the world—and would serve as the dominant forms in how music would be sold for the next 40 years—the first four years of their existence was a clear downturn for music sales because people simply had too much of an “either/or” to choose from at one time.

In major markets of business, there are often two standards.  History shows us that in several ways.  While consumers typically desire choice, they also align themselves to an “us” or “them” camp.  For decades the “Big 3” produced their lines knowing that about 85% of people who go shopping for a passenger vehicle come home with a car and 15% return with a truck.  In the 1980’s, video recorders sold at roughly the same rate:  85% for VHS, 15% for Beta.  In the early 1990’s, IBM-compatible (in time to be known as ‘PC’) computers outsold the Apple Macintosh—again, at an 85-15 rate.

Of course, 45’s and LP’s have become novelty items.  The Big 3 have been forced to slide over to make room for imports and new domestic brands, including their own lines of trucks and other non-passenger vehicle lines.  And the PC-or-Apple line has irreversibly been wiped away as technology has jumped from the desktop into our hands, and soon to our wrists and eye wear.

But each of these mediums also share this in common:  At one time in their existence and for a sustained period, they all had remarkable periods of growth and expansion.  What they do not necessarily share, though, is the ability to grow sufficiently to the pace of the industries they helped accelerate, expand or create–and in cases like VHS and Beta tape–ultimately become obsolete to.

This is not to suggest that bridling an organization’s energy is the objective of the leader, on the contrary.  The leader must find the right vision, resources, and courage to pursue opportunities for the organization to compete in new sectors, new arenas and in new markets of service or production.  Moreover, it is important that the values of tradition and organizational standards are effectively managed so that they do not become limitations and barriers to new frontiers of success.

Leaders, and their courageous followers, will confidently and boldly pursue those frontiers and in turn contribute to new futures many more may benefit from.

Based on an excerpt from “Accidental Empires” by Robert Cringely.